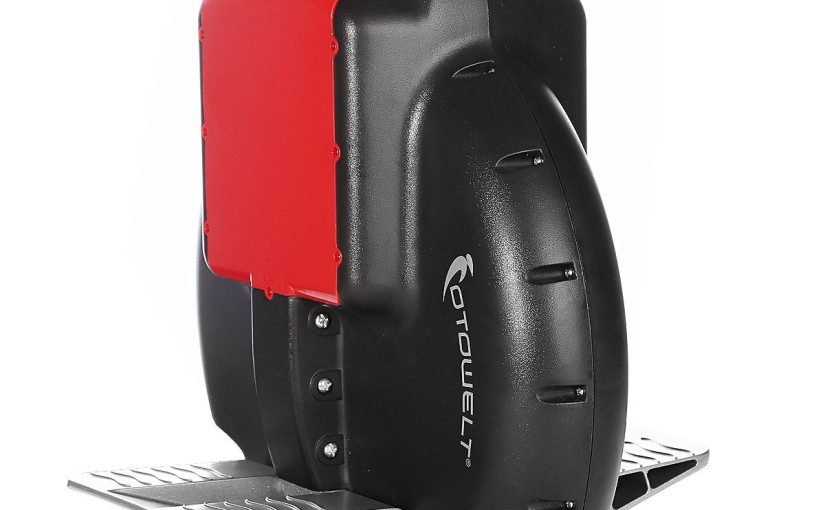 Self Balacing Electric Unicycles become more and more popular. Now, an almost unmanagable number of products exist. Therefore, for the average consumer it becomes almost impossible to identify the best unicycle out of the many offers.

For this reason, we are reviewing the most popular unicycles on this website to support you in finding the product that is best fitting your demands 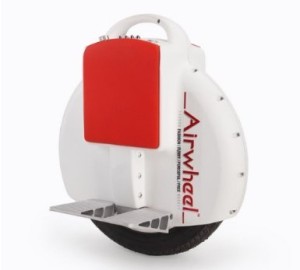 The Airwheel X3 ist the smallest and cheapest electric unicycle from the airwheel series.

It weights just 21,4 lbs (9,7 kg) and is therefore a very handy vehicle, that can be carried into public transportation or into the office easily.

The official range – published by the producer – is 9,4 miles which is sufficient for most rides in an urban environment. However, take into account that the range decreases when the vehicle is driven by a heavier person or driven on ascending routes. Therefore, the average driver will more likely reach 7-8 miles.

Charging the Japanese-made battery takes approximately one hour. That’s a fantastic time for such a powerful vehicle.

The shipment comes with:

For learning to keep the balance it is recommended to use the exercising belt and the training wheels. However, after some hours of driving practice you will hardly need them anymore.

Where to buy the Airwheel X3 electric unicycle? 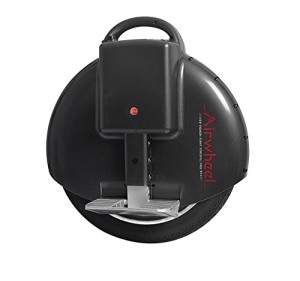 The Airwheel X8 is the largest electric unicycle of the Airwheel X Series. The wheel is a real eye-catcher due to its dark carbon design.

With a weight of 24,5 lbs (11 kg) the Airwheel X8 is much heavier than the models X3 and X5. However, it is still much lighter than most of the competitors‘ products.

Therefore you can take the X8 with you in public transportation or even in your car. Though, due to its weight, carying the X8 will soon be very exhausting.

Where to buy the Airwheel X8 electric unicycle? 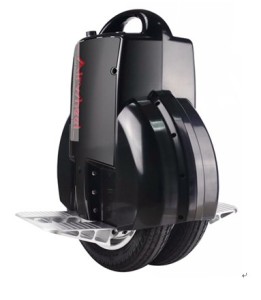 Technically speaking the Airwheel Q3 is not an unicycle because of its twin tires. However, due to this driving and keeping the balance on the Q3 is much easier compared to most other electric unicycles.

According to the producer you can learn driving the Q3 in just under one hour. Therfore the Airwheel Q3 is ideal for beginners and elderly persons.

The range of the Airwheel Q3 reaches 24,8 miles (40 km). However, we need to point out that this range is just valid for economical driving on straight routes. For the average Joe a range of 18,6 miles (30 km) is more realistic. However, this range is still sufficient for most rides in a city.

Where to buy the Airwheel Q3 electric unicycle?

Buy the Airwheel Q3 on Amazon.com

Buy the Airwheel Q3 on Amazon.co.uk 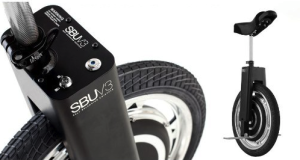 So far, the electric unicycles introduced on this site are not very similar to the classical desig of unicycles. The user needs to stand straight because there is no seat.

In this regard the SBU V3 is an exeption because of its similarity to the classical unicycle design. Therefore the user of the SBU V3 is sitting on a seat, therefore you could confuse it with an mechanical unicycle.

However, the performance of this model is alike to the Airwheel X-Series: The range is 10 miles – what is totally fine for urban environment – and the highest speed possible can reach 15 miles / h.

A great advantage of the SBU V3 is the short charging time of just 45 minutes.

Due to its design this unicycle can carry heavy persons with a weight up to 320 lbs (145 kg). Therefore it is the best unicycle for heavier persons.

One shortcoming is the price: The SBU V3 costs twice as much as a similar unicycle from the Airwheel-Series. 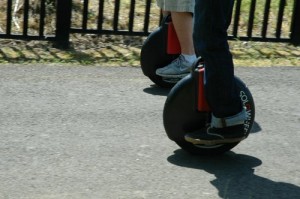 The Solowheel from Inventist was the pioneer of the E-Scooter-Revolution. It was one of the first products that attempted to put the wheel in a case with two platforms on either side, where the user can stand. This innovative design was copied from allmost all producer in the world.

The weight, range and speed is quite similar to the unicycles of the airwheel-series.

However, charging takes much langer (2 hours) and the price is higher. Therefore, most people will prefer to choose a different product.

Where to buy the Solowheel electric unicycle?

By the Solowheel on Amazon.com

By the Solowheel on Amazon.co.uk 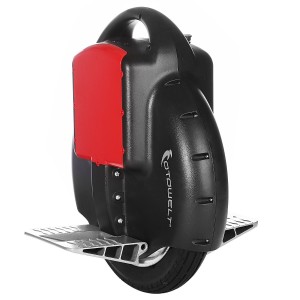 This product from Monowheel is a real eye-catcher due to its flashy design. Due to its built in handles, you can pick it up and carry it around everywhere, which makes this electric unicycle very flexible.

Also the technical data is convincing: The range is about 21,7 km while the top speed reaches 12,4 miles / h under perfect conditions. The only diadvantage is the long charging time of 2 hours. However, in many cases you don’t need a shorter charging time. E.g. if you use the Fotowelt to drive to your office you can just charge it there and drive back when you finished your work.

Where to buy the Fotowelt electric unicycle?